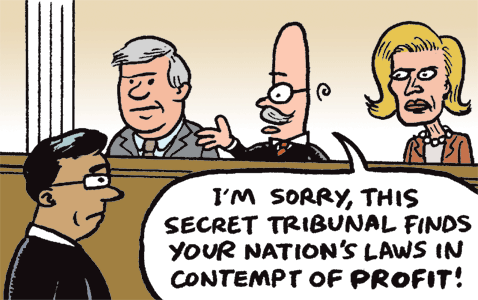 A mechanism contained in trade agreements between countries where a foreign investor (e.g. a multinational corporation) from one country in that agreement can take the government of another country within that trade agreement to court if IT breaches a standard in the agreement.

This can be and is used by investors to prevent governments from introducing human rights and environmental regulations that could harm the profits of these investors.

These court cases take place in secretive courts, with no transparency, no appeal system and high costs. It can cost the taxpayer billions. Previous cases brought against governments include:

This is a problem for developing countries, which face a higher proportion of cases, with little resources to fight against cases.

This puts too much power in the hands of corporations and undermines a countrys ability to improve conditions.

‘Much to fear from post-Brexit trade deals with ISDS mechanisms’ – Letter, The Guardian